In these lecture notes we discuss a complexity class called coNP and its relationship to P and NP. This discussion will lead to an interesting notion of “good characterizations” for problems, which plays an important role in algorithm design.

The classes NP and coNP are widely believed to be different, which means that there exist problems such that YES instances have short proofs but NO instances do not necessarily have short refutations.

The following lemma shows that proving this conjecture would also prove that \({\mathrm{P}}\neq {\mathrm{NP}}\).

The following lemma shows that NP-complete problems cannot have polynomial-length refutations unless \({\mathrm{NP}}={\mathrm{coNP}}\).

The following lemma shows that problems with good characterizations are unlikely to be NP-complete.

Conjectured landscape of NP vs coNP 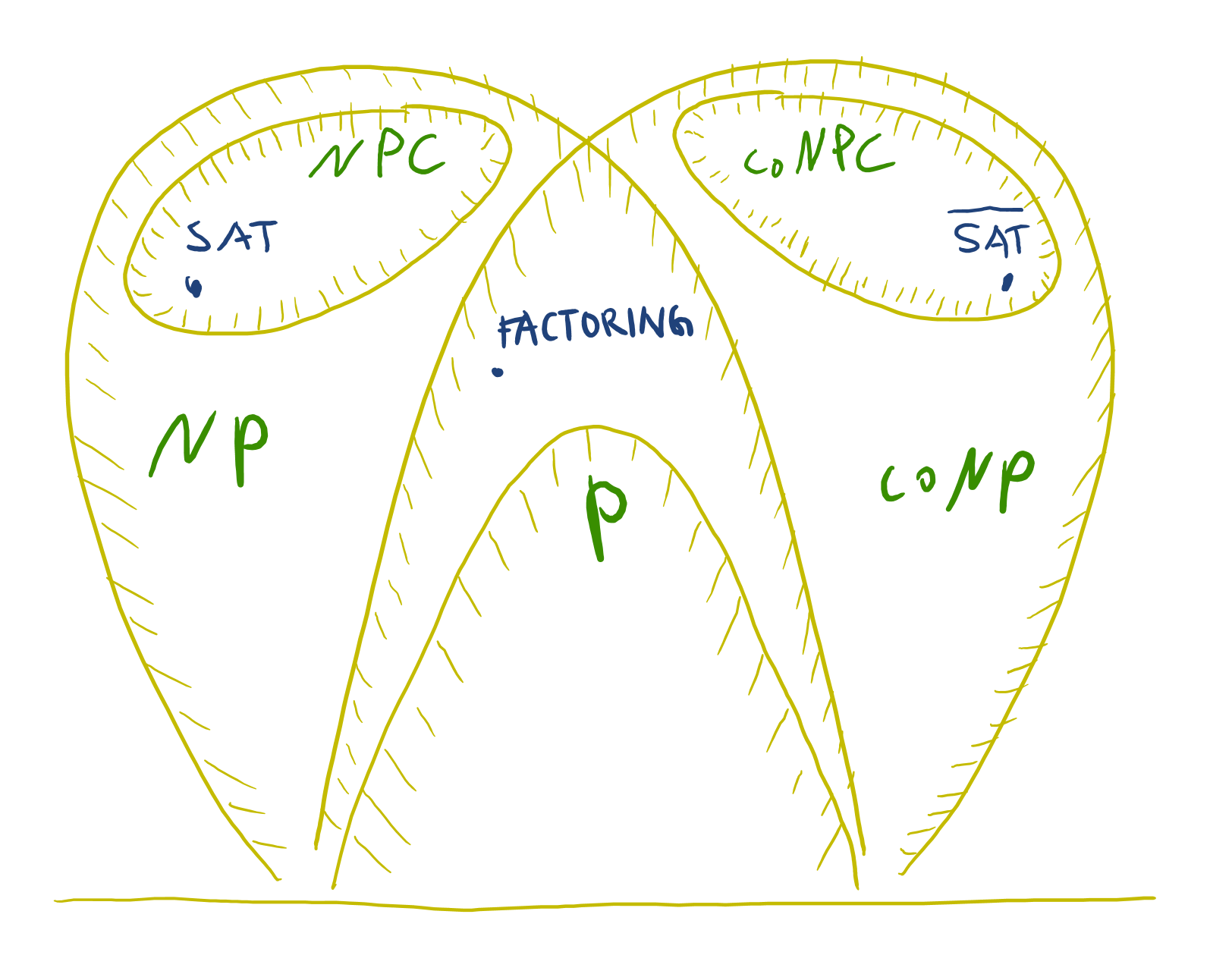 We discuss how to show that LINEQ has a good characterization.

First, we show that the problem is in NP.

Proof sketch. Given \(A\), \(b\), and \(x\), checking \(A x = b\) takes time polynomial in the bit complexity of \(A\), \(b\), and \(x\). (The fact that integer multiplication and addition take polynomial-time also implies that matrix-vector multiplication takes polynomial-time.) It remains to show that every satisfiable system of linear equations \(\{A x = b\}\) has a solution \(x\) with bit complexity polynomial in the bit complexity of \(A\) and \(b\). This fact can be shown by bounds on determinants. See homework 5, question 3 for more detailed hints. \(\qedhere\)

In order to show that \({\mathrm{LINEQ}}\in {\mathrm{coNP}}\), we will use the following linear algebra fact.

The above linear algebra fact implies the following reduction between LINEQ and its complement.

In the following, a flow network is a directed graph with dedicated source and sink, and nonnegative integer capacities assigned to edges.

The following problem turns out to be closely related (by the max-flow min-cut theorem below).

Both MAXFLOW and MINCUT are problems in \({\mathrm{P}}\) (using fairly sophisticated combinatorial algorithms). Below we will discuss how to show that these problems have good characterizations.

Recall that the Ford–Fulkerson algorithm shows the following interesting-trivial fact.

Fact. Every flow network (with integer capacities) has a flow of maximum value that the flow values along all edges are integers.

This fact allows us to conclude that \({\mathrm{MAXFLOW}}\in {\mathrm{NP}}\): Given a network \(G\), a number \(v\), and a potential flow \(f\), we can verify in polynomial time if \(f\) is a valid flow in \(G\) of value larger than \(v\). Furthermore, if there exists a flow of value larger than \(v\), then there is also one with bit complexity bounded by the bit complexity of \(G\). (Here, we use the fact above.) It is also straightforward to show that MINCUT is in NP.

Lemma. Both MAXFLOW and MINCUT are decision problems in NP.

Also recall that the analysis of the Ford–Fulkerson algorithm showed the following connection between MAXFLOW and MINCUT.

Maximum-flow minimum-cut theorem. For every flow network, the maximum value of a flow is equal to the minimum capacity of a source-sink cut.

Together with the previus lemma, the max-flow min-cut theorem allows us to show that MAXFLOW and MINCUT are also in coNP.

For this problem a good characterization has been known since 1976 (Pratt).

Also polynomial-time randomized algorithms—by Miller–Rabin and Solovay–Strassen—have been known for this problem since around the same time. It has been an open problem to remove the use of randomness in these tests of primality. In 2002, Agrawal, Kayal, and Saxena showed that this problem indeed has a deterministic polynomial-time algorithm.

The following problem plays a central role in cryptography (especially public-key encryption). An efficient algorithm for this problem could be used to break many cryptographic protocols used today, in particular RSA.

In order to give evidence for the security of current cryptographic protocols, it would be great to be able show that FACTORING is NP-complete. (Such a proof would not imply that the protocols are actually secure but it would still boost our confidence in their security.) However, it turns out that FACTORING has a good characterization, which means that it is not NP-complete unless NP is equal to coNP.